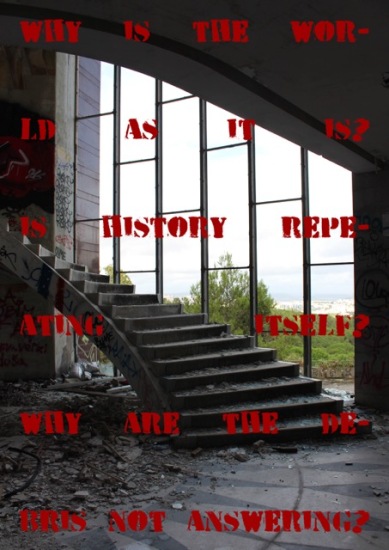 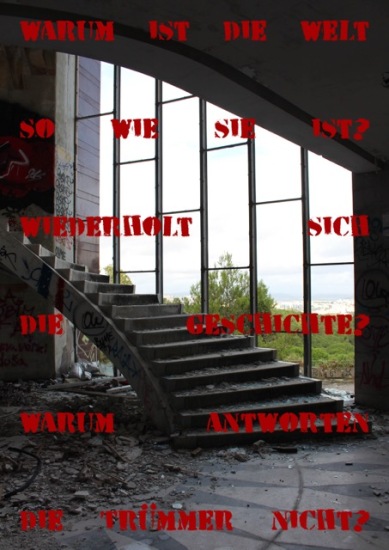 “We are realizing more and more that a poetic emotion lies at the origin of revolutionary thought.” – Jean Genet, Letter to American Intellectuals

He looks to the right; and then to the left; he thinks he has to decide – which way to turn; like a pressure, upon him, he thinks: I must decide; and yet, there is that sudden creeping feeling, a type of epiphany that arrives slowly, unexpectedly: he realizes he has already decided. END_OF_DOCUMENT_TOKEN_TO_BE_REPLACED

It is surely a challenging discourse for everyone set to dedicate her/his life to working as artist today. We have a statement which we find suited to this topic, a sort of manifesto from 2011, about what an exhibition should be and shouldn’t be in our opinion. It was related to the Venice Biennale from the same year (Romanian pavilion) where we listed on its facade reasons to both be and not be part of such a famous (and at the same time infamous) art event. 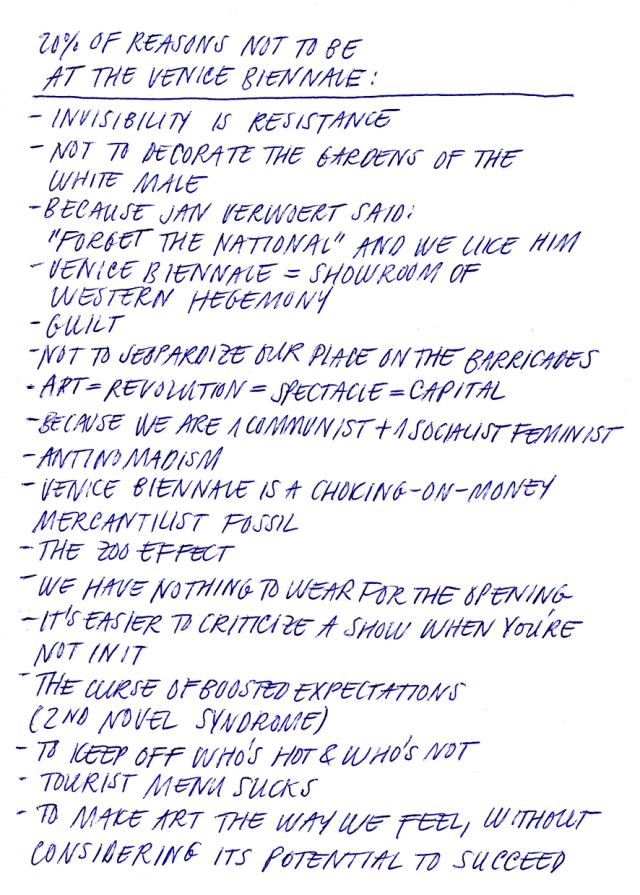 END_OF_DOCUMENT_TOKEN_TO_BE_REPLACED

Rehearsing Futures Past, an oral blind folded performance, which takes place in front of my Duende Neon.

First Turning: I enter from the stage left and stand in front of my neon sculpture The Duende Diagram. My assistant moves to center stage, takes hold of my shoulders and turns me 360 degrees twice leaving me facing my neon sculpture. Blindfolded I project the red dot of my laser wand upon the words Taylorism and Hebbinism. She recites from the other neon-illuminated terms that surround these words pronouncing Cultural Capitalism and Cognitive Capitalism. Se turns me 180 degrees so that now I am facing the audience and my back is towards the neon I place the megaphone up to my mouth and begin to recite the contingent terms that create the diagram inside my skull.

END_OF_DOCUMENT_TOKEN_TO_BE_REPLACED

„To be radical is to go to the root of the matter. For the artist, however, the root is the artist himself“.

Kandy Marxhol: Critique of Philosophy of Art from A to B

Even if, theoretically, they seem to represent diverging interest and functions, the Intelligentsia and the Priviligentsia are the two components of the cultural and political elite that continually flirt with each other in Socialist Society. The former plays the part of „social critic“, obviously within the very narrow limits, legal or illegal, imposed by the system, while the latter plays the part of the guardian, manager and beneficiary of the established régime. The Intelligentsia played a certain role in the implementation of Communism, however, after the consolidation of the regime it could only play the part of illustrator or analyst of socialist reality, which it did with a wide range of attitudes, from emulation to servility and even daring „constructive criticism“ or „cultural resistance“, dissidence being extremely rare and rather singular. END_OF_DOCUMENT_TOKEN_TO_BE_REPLACED

A match can be won, lost, or tied  Kazimierz Górski

The unforgettable coach of the Polish national football team was known for a peculiar sense of humor. His tautological bon mots, such as the one above or the claim that “the ball is round and there are two goals, either we win, or they”, are repeated even today. They arouse amusement with their majestic tone. They sound like quotes from Montaigne, Pascal, or other philosophers. This style adopted by Górski, to give a rank of philosophical maxims to the obvious statements, was an ironic tweak of the nose at tacticians, strategists, commentators, sports journalists, and all those who like to talk too much about sport. Górski wanted to suggest that there is no sense in talking too much about sport, that rules of game are simple and apart from them there are only: rivalry, skills, and a stroke of luck. END_OF_DOCUMENT_TOKEN_TO_BE_REPLACED